The day of the Toronto van attack I was at my workplace near Yonge and Sheppard. I had a report to submit and decided not to go outside for my daily lunch walk and ended up staying in the office to complete it. Later that afternoon, the noise of sirens blaring from the streets told me something was seriously wrong. Hours later I would realize just how lucky I was not to have gone outside to the street during lunch time. Tragically, several people in the neighbourhood did not have the same fortune that day and lost their lives or were seriously injured.

This is a neighbourhood where I have worked for the past seven years. The next day, with a heart full of emotion I walked to the makeshift memorial near Yonge and Finch to pay my respects to the victims. The strong support shown by everyone that day and the days to follow was inspiring. Since that fateful day we have seen the community of North York rise. Similarly, I know the Danforth will too rise even after recent tragic events.

Attacks of this nature leave us with several hanging questions: What can be done to prevent them in the future? Are our emergency and police services trained adequately for these types of scenarios? Can the public be rapidly warned of similar attacks or emergencies by text or other technologies to prevent casualties? These questions are borne from one objective which we all share: a safe Toronto for everyone.

Our communities rise. Despite the uncertainty and hopelessness these events may bring, we too need to rise above fear and help find ways to make all our communities safe.

“I refuse to accept despair as the final response to the ambiguities of history.” ~ Martin Luther King 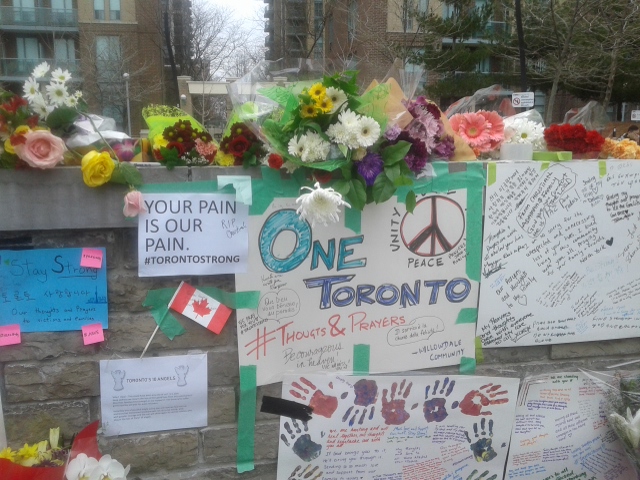